Córdoba is one of the jewels of Andalusia in Southern Spain.  Like many of its sister cities in the area (Granada, Seville, Cadiz) it boasts one magnificent structure that places it on the must see list of Spanish cities.  What is this magnificent structure I’m talking about?  Well, it’s called the Mezquita-Cathedral – literally a Mosque-Cathedral.

Believe it or not, but more that a millennium ago, Córdoba was the Islamic center of Spain.  Conquered by the Moors in 711, the original Christian Visigoth church was first divided into a Muslim and a Christian half before it was later demolished and the Grand Mosque of Córdoba was built in its place.  In 1236, the building was once again changed and with Córdoba now under Christian rule, it was transformed into a Roman Cathedral.

The Mezquita has many features like its 856 columns built from materials of a nearby Roman temple with materials such as marble, onyx and granite.  The lower horseshoe arches is another famous feature as can be seen in the prayer hall.  The mihrab or prayer niche is one of the most spectacular pieces of design and architecture in the Mezquita.  I found myself continuously circling back to stare at it again.  In contrast to the mihrab, there are chapels dedicated to many saints around the walls of the Mezquita.  Something else I found intriguing was the minaret of the mosque that was changed into a bell tower.

The Mezquita sits on the river banks of Andalusia’s major river, the Guadalquivir where you’ll find Córdoba’s famous Roman bridge.  The area around the Mezquita is great for exploring on foot.  The narrow streets of the Jewish quarter spreads out from the Mezquita with small shops and restaurants where you can catch the Menu del Dia specials. Córdoba is not just about the Mezquita and I’ve compiled a list of top things to do here. 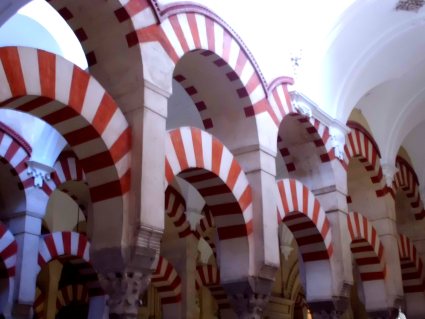 Horseshoe arches of the Mezquita, Cordoba 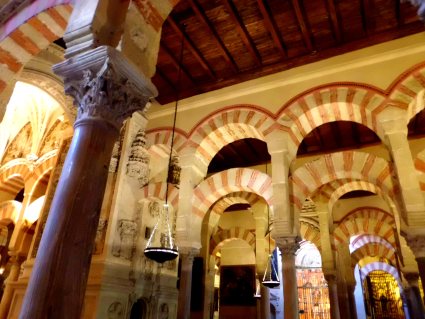 Horseshoe arches of the Mezquita, Córdoba 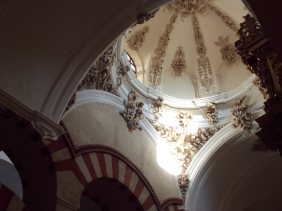 More of the inside:

18 replies to A visit to Córdoba’s majestic Mezquita

This site uses Akismet to reduce spam. Learn how your comment data is processed.