Córdoba was once the Roman and Moorish capital of Spain with its roots in the banks of the Guadalquivir River in Andalusia, Spain.  It has a rich cultural and architectural heritage and in medieval times it was one of the few places Jews, Muslims, and Christians lived together peacefully.  Yet, it’s somewhat overshadowed by its neighbors, Granada and Seville and left out of many Spanish itineraries.  I enjoyed my stay in the city so much, I would recommend it to anyone traveling to Spain and the South.  Here’s my 6 Top Things to do in Córdoba I compiled after my stay.

*You can download this article and a interactive map from GPSMyCity here.

The Mezquita is Córdoba’s most spectacular sight to behold.  It was built as a mosque in 786 and turned into a cathedral after the Christians finally conquered Córdoba in the 1200s.  It’s filled with a ‘forest’ of marble columns and typical Islamic red-and-white horseshoe arches, multiple domes, a mihrab (prayer niche) and various chapels.  You can spend hours here admiring the detail and grandness of the construction, reminding just how important Córdoba was in ancient times.  Be sure to take a look at the tranquil orange tree patio just outside the Mezquita.  See all my photographs and more info about a visit to the Mezquita here. 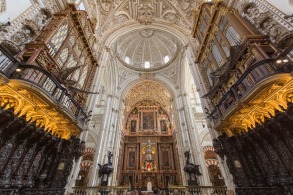 Córdoba’s Roman bridge is another reminder of the city’s place in ancient times.  It was built by the Romans and still uses some of their first century foundations.  The bridge is a pedestrian zone that leads straight to the Mezquita.  You can get a great view of the grand structure of the Mezquita and some beautiful pictures at night.

Córdoba is filled with pretty tiled patios and colorful flowers in a reminder to Moorish times and architecture where they were used to escape the summer heat (it was 42 degrees when we visited!).  Close to the Mezquita on the side of the bell tower, the famous Calle de las flores leads you down a narrow street of beautiful flowers and courtyards.  This is also the street most tour groups press into after visiting the Mezquita and it gets very crowded.  All throughout the old town you’ll find more hidden patios.  There’s even a festival in spring where people open their homes so that visitors can view their courtyards.

On the site where the Alcazar de los Reyes Cristianos stands today was once a Visigoth fortress before the Moors built a a residence of the caliphate on the site.  Later on it was used as a fortress for Ferdinand and Isabella, the Christian Monarchs and in the Spanish Inquisition.  Inside the building is some old Roman mosaic murals, but it’s the beautifully kept garden of the residence that lures visitors. 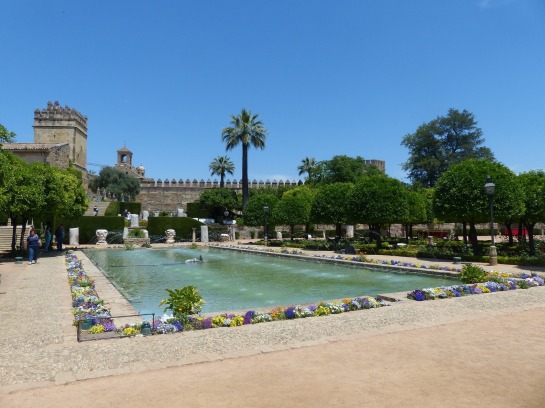 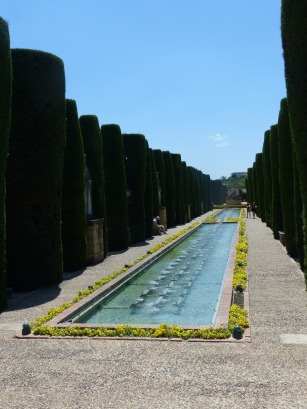 5.  The Moorish ruins of Medinat-al-Zahra

I’ve gotten used to seeing Roman ruins everywhere in Europe, so when I heard about the ruins of a vast Arab-Muslim summer palace in a ruined capital of the Western Caliphate 5km outside of Córdoba, I really wanted to see them.  It was built by Abd ar-Rahman III between 936-940 against the foothills of the Sierra Morena, but became unoccupied in 1010 after a civil war.  The ruins and history are interesting and some of the horseshoe arches seen in the Mezquita can be seen ‘in ruins’ here.  There is a local tourist bus that runs to the site or your can take a taxi, just ask at the tourist information in town.  There’s also a museum at the sight showcasing some of the finds from the excavation area.  All throughout the South of Spain, I was really fascinated by the Moorish heritage and if you are too, I suggest a visit to Medinat-al-Zahra.

6.  Watch a Flamenco show with an Equestrian twist

I absolutely love flamenco and try to watch a performance in every Spanish city I visit if I can.  In Córdoba I watched two shows, a traditional performance with dancers, singers and musicians and…a flamenco show with an equestrian twist.  The Cordobans are very proud of their Andalusian horses and a visit to Caballerizas Real (Royal Stables) will show you just why.  The creatures are breathtakingly beautiful!  The show is coordinated with flamenco dancers, horses and their riders and so much fun to watch.  It’s a good way to spend the early evening before heading off for a late dinner.  The traditional show I watched was at Tablao el Cardinal.  (Note: I had to sneak in some photos, didn’t want to disturb the performers.)

Cost: Anything for 18 Euro and up.

If you have time, here are some more places to see: The Juderia (Jewish quarter) and La Synagoga, Viana Palace (former aristocratic residence with over 14 patios), Zoco Artisinal Market (for souvenirs), Museo de Bellas Artes (features Sorolla, Goya, ect.).  I also went to see a classical guitar show with orchestra in the concert hall.

Budget stay: There’s many options but we stayed at Hotel Maestre and they have a hostel section too.  The stay was OK for the price but the location was excellent.

*If you liked this post you can save it to read offline later via the GPSMyCity App! You can download an interactive map accompanying this post too 🙂 Click here or on the side bar banner. Read the disclaimed for affiliates here.

Part of the #MondayEscapes link up.  Check it out here.

31 replies to 6 Top things to do in Córdoba

This site uses Akismet to reduce spam. Learn how your comment data is processed.